Habari, my name is Freya Casey and I am a final year International Development and Food Policy student, in UCC.

I am writing a piece on smokeless stoves and how they are helping the environment and the health of the communities where Brighter Communities Worldwide work. This blog is following on from my previous blog on Climate Change in Londiani. The aim of the smokeless stove is to replace the traditional 3 stone open fire, and extract the smoke from the cooking area, in order to transform it into a healthier and safer place to cook and live in.

The smokeless stoves programme is contributing to the achievement of four of the Sustainable Development Goals (SDGs). Goal three – good health and wellbeing; Goal seven – affordable and clean energy; Goal eleven – sustainable cities and communities and Goal thirteen; climate action. Smokeless Stoves are installed in households through a cost sharing programme with Brighter Communities Worldwide. Each household provides the clay, bricks & sawdust which can all be acquired locally and Brighter Communities Worldwide provides a trained stove installer and a tin chimney.

The chimney and design of the smokeless stoves remove smoke from the kitchen and reduces the amount of firewood needed when cooking. They also reduce cooking time, in turn, reducing the amount of smoke being produced, which then means lower amounts of smoke from the stoves is being released into the air, causing a reduction in air pollution in the area.

Due to the high levels of smoke emitted from the traditional open fires, the numbers of respiratory illnesses are high. This leads to, approximately 4.3 million people a year, worldwide, dying prematurely from illnesses caused from household air pollution, according to the World Health Organisation. In the areas where the stoves have been installed, there has been a 56% decrease in respiratory illness. In turn, household medical costs are reduced, so they can put more money aside for expenses like school fees, and for basic commodities, such as food and firewood.

In rural Kenya, the main source of fuel is timber. Smokeless stoves reduce the amount of timber needed by a third which in turn is reducing the amount of trees cut down for domestic use. Deforestation is a major cause of climate change – the more smokeless stoves that can be provided to households the less trees will need to be cut down.

Traditionally, responsibility for the collection of firewood falls on the women and girls in each household.  With the new smokeless stoves, the amount of time needed to collect firewood is reduced which means the women and girls have more time available to them for school and for income generating activities. This is creating economic empowerment within the household.

At the moment the Kenyan government are trying to combat deforestation through an initiative to have Kenya’s forestry coverage increase from 6% to 10%. The government work with the community through forestry alliances. In Ndubusat, the Surgeon Noonan Volunteers and I helped a community plant 25 indigenous Prunus Africana trees, in honour of world environment day. Here, the land was used for farming first before the tree planting. The women in the community are given land to farm on for up to four years. Once the four years has gone by, the soil will be nutrient rich, and the trees should grow well on the land.

The video attached to this blog shows the process of how a smokeless stove is built. The videos were taken by Dan Devane, who was part of the November 2018 Harambee team. Featuring in the video are; two other volunteers, Helen FitzGibbon and Joan Brosnan, the stove installer, Kenneth, and Brighter Communities Worldwide, field officer, Reuben Koskei. 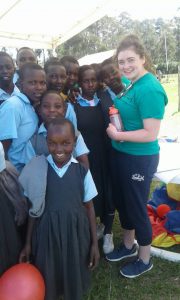 Roisin, a third-year student on placement with Brighter Communities Worldwide

Operating Theatre begins in Londiani District Hospital
We use cookies on our website to give you the most relevant experience by remembering your preferences and repeat visits. By clicking “Accept”, you consent to the use of ALL the cookies. However you may visit Cookie Settings to provide a controlled consent.
Cookie settingsACCEPT
Manage consent