The team arrived in Benditai on Monday 22nd July and quickly settled into life on the campsite.

A lack of running water or electricity did not present a problem to the eager volunteers who rapidly got to work on the project tasks.

They have been working hard all week on water tanks, HECA clubs and a Peer Education Lifeskills course.

The weekend provided some entertainment through dramas by two local community groups and a soccer tournament.

A local single mother and widows group organised a fantastic drama about the difficulties faced in their families and the community health workers had a drama on HIV/ AIDS. The Irish also provided some entertainment with singing, guitar and tambourine!

Five troughs have been installed for rainwater collection tanks. This will make the tanks stronger and will ensure that they will last well into the future. Each tank holds 3500 litres of rainwater and the research done this week on their use shows that each tank is providing enough drinking water for on average 35 people for approximately 6 months of the year.

Working with the families using the tanks has been very rewarding and while the work is very physical, seeing the end results makes it all worthwhile. In one of the homes, the woman explained how she would have to go to the local river three times a day to collect enough water for her family if she didn’t have a tank from Friends of Londiani.

Masaita Secondary school is the first secondary school in the Masaita location to be a HECA school. HECA is a global initiative for schools to become healthy places. HECA stands for the Healthy Environments for Children Alliance. The schools vision belief and proactive approach to HECA is something to behold. This school has already taken the initiative to form a committee which comprised of students from Form 1 – 3 and it was from them that FOL took its lead. They had really put time and effort into what they wanted to achieve by setting up the HECA club. It seemed that they really have a desire to improve the health, sanitation and aesthetics of their school.

After a week of working together the school definitely made great progress and has produced their first HECA school magazine, made health information posters, installed some Tippy-tappy’s for hand-washing and also made further plans to inform and sensitise the surrounding community. It was a very interesting week and this school should be applauded for their massive foresight and desire to improve. It was a special week for all concerned.

The various communities from Kiplokei, Sachangwan, Benditai, Mititatu and volunteers from FOL gathered in Symbion under a warm Sunday afternoon sun to test their volleyball and soccer skills. Every team member received a tshirt for participating. The Irish volunteers were treated to an afternoon of soccer Kenya style – i.e. lots of face-paced running, superb goals and head-spinning celebrations. After the soccer, the volleyball skills of the Harambee 09 volunteers were put to the test. Suffice to say, we came, we saw but we did not conquer! It was a wonderful afternoon and it proved that sport can be a really unifying medium. The four youth clubs involved were very appreciative of the tshirts and prizes provided by FOL which included footballs, shorts, pumps and a volleyball net.

During the week the FOL volunteers co-organised a course for 60 women from Sachangwan village. The group were very eager to learn and were very open and receptive to the course itself. The Kenyan welcome was truly felt by the Irish trainers and many meaningful exchanges occurred. The discussions held during the three-day course were very educational for all concerned. The women in the group varied in age from 17 to 90 years and their quest for knowledge was admirable.

More updates in the next few days… If you would like to donate to our Harambee 2009 project please click here.

If you would like to receive more information on Harambee 2009 please contact Friends of Londiani 9 Cois Cuain, Mosestown, Whitegate, Co. Cork ; Telephone: 021/4662730 or email harambee2009@friendsoflondiani.com 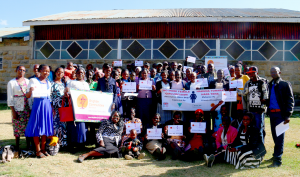 Harambee 2009 – Week one in Londiani
We use cookies on our website to give you the most relevant experience by remembering your preferences and repeat visits. By clicking “Accept”, you consent to the use of ALL the cookies. However you may visit Cookie Settings to provide a controlled consent.
Cookie settingsACCEPT
Manage consent